Gruden’s return to Raiders turns into dud after fast start

OAKLAND, Calif. (AP) — Jon Gruden’s return to the Oakland Raiders’ sideline couldn’t have gotten off to a better start, with Marshawn Lynch powering his way into the end zone for a touchdown.

The rest of the night turned out to be rather forgettable for the Raiders and showed that Oakland has a long way to go to get back to the level Gruden had the team playing at when his first stint as coach ended more than 16 years ago.

All that positive energy generated when Gruden was hired back in January turned to a chorus of boos by the end of a 33-13 loss to the Los Angeles Rams on Monday.

“It was great,” Gruden said of being back on the sideline at the Oakland Coliseum. “It’s not time for that anymore. It’s about getting this football team better. It wasn’t good enough tonight.”

The Raiders (0-1) were good enough for one half as Derek Carr led the team to that opening-drive touchdown and two more field goals that gave Oakland a 13-10 lead at halftime.

But the Rams (1-0) then scored all 23 points in the second half, with Marcus Peters returning Carr’s third interception of the game 50 yards for a game-sealing touchdown that sent the fans who pined for Gruden’s return for years heading to the exits.

“We are a better team than what was put out there on the field,” tight end Jared Cook said. “This one game does not define us.”

The Raiders took the opening kick and drove 75 yards for a touchdown on a 10-yard run by Lynch. The Rams had Lynch stood up at the 3, but he powered his way into the end zone with help from a push by his offensive linemen.

Oakland managed just six points the rest of the way against a defense fortified by the offseason additions of former All-Pros Peters, Aqib Talib and Ndamukong Suh.

Carr threw an interception in the end zone to John Johnson in the second quarter, another in the fourth when he tried to pull back a pass at the last minute only to have the ball slip out and float right to linebacker Cory Littleton, and then the third on a miscommunication with Cook.

“He did some good things tonight and obviously there are some critical errors he has to eliminate,” Gruden said. “He knows that. We all know that.”

Here are some other takeaways from the game:

The Rams started slowly after resting their entire starting offense throughout the preseason, as well as several key defensive players. But things turned in the second half, starting with quarterback Jared Goff leading the team to a tying field goal on the opening drive. Then they took the lead for good on a 58-yard, four-play drive that featured two passes downfield to another offseason addition, Brandin Cooks, and an 8-yard TD to Cooper Kupp.

“Any first game of the year, you’re dealing with some things,” Goff said. “You look at other teams around the league and it’s no different for us.”

Cook was one of the only Raiders to have a big night. He caught nine passes for 180 yards , breaking Todd Christensen’s franchise record for receiving yards by a tight end. Christensen had 173 vs. the Chargers on Nov. 20, 1986.

The Raiders got thrown for a loop early when long snapper Andrew DePaola injured his knee on a punt in the first quarter and didn’t return. Tight end Lee Smith filled in and provided accurate snaps on two field goals. He had a high snap on a punt, but Johnny Townsend leaped and brought it down with no issues. It was a far cry from the 2012 season opener when Jon Condo got hurt for Oakland and Travis Goethel came in and botched three snaps in a loss to the Chargers.

“It was stressful, I can’t even lie to you guys,” Smith said. “I’m just glad they all got back there.”

“You just try to get in that rhythm, get the ball, get consecutive run plays in a row,” he said. “We were able to do that in the second half.” 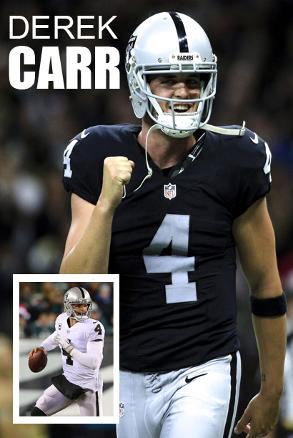